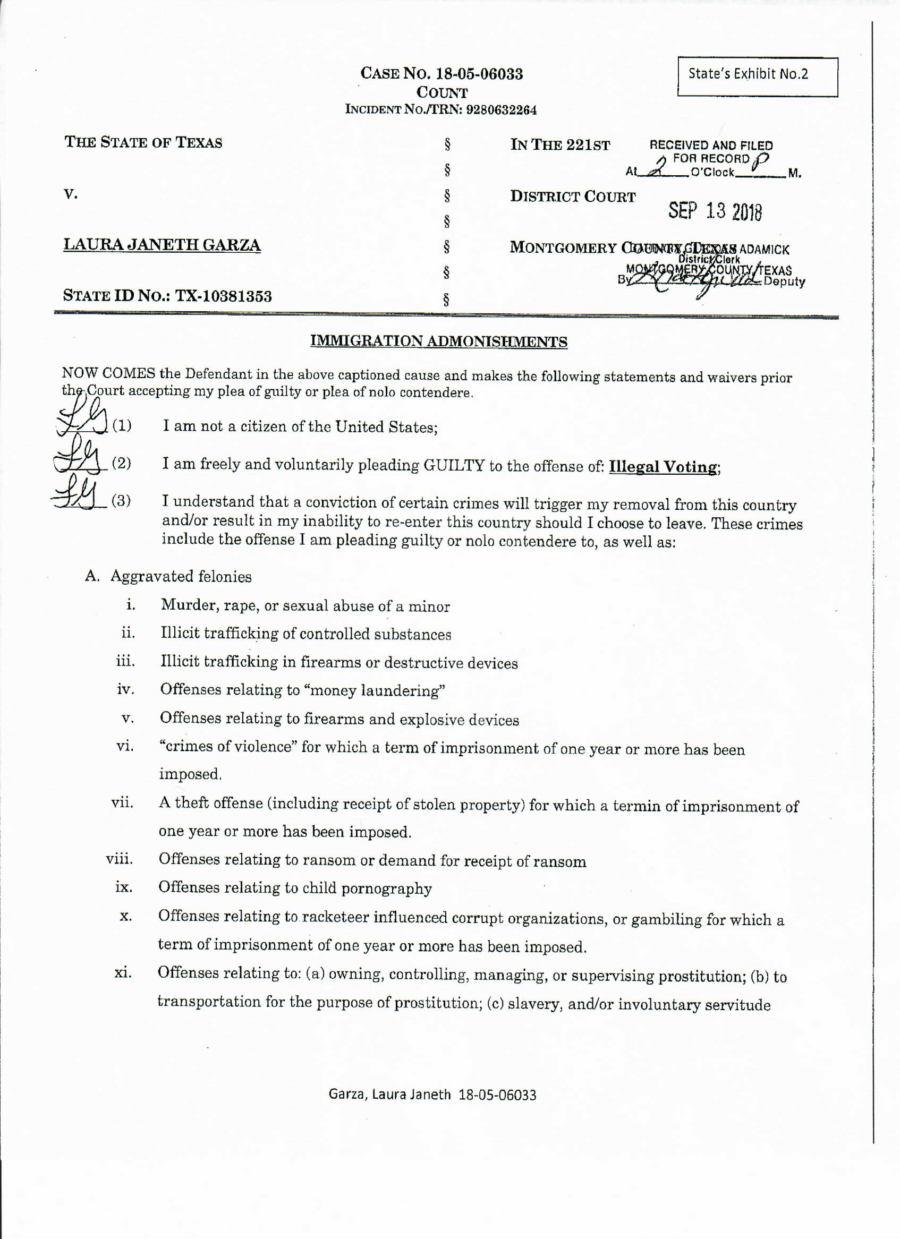 The State of Texas continues to show the rest of the United States that the only effective deterrent to voter fraud is enforcing election laws. The State of Texas maintains the integrity of elections by prosecuting people who commit voter fraud. In Texas, complying with voting laws is not optional.

A recent example of Texas’s commitment to preventing federal, state, and local elections from deteriorating into elections similar to those held in third-world countries is the sentencing of Laura Garza, a Mexican national, who violated America’s immigration and election laws. Garza pleaded guilty to charges of voter impersonation and ineligible voting, both second-degree felonies in Texas. Judge Lisa Michalk sentenced Garza to 10 years in prison, probated for 10 years, levied a $10,000 fine, and 180 days in jail to be served day-for-day on each count as a condition of probation.” Garza will be deported after she serves her jail time.

According to Texas Attorney General Ken Paxton, the Texas Department of Public Safety’s Houston Region referred Garza’s case to his office and after an investigation by Texas’s Election Fraud Unit determined in May that she stole the identity of a U.S. citizen and illegally registered to vote in Harris County. Garza voted illegally in multiple elections, including the November 2016 presidential election. No word on whether Garza submitted a mail-in ballot for Robert Francis O’Rourke.

The Texas Department of Public Safety’s (DPS) Houston Region brought Garza’s case to Attorney General Paxton’s office, and it was determined in May that she stole the identity of a U.S. citizen and illegally registered to vote in Harris County. Garza voted illegally in multiple elections, including the November 2016 presidential election. No word on whether she was able to submit a mail-in ballot for Robert Francis O’Rourke from her jail cell.

“Election integrity is a top priority for my office, and arrests and convictions like this clearly demonstrate our commitment to ensuring that Texas elections remain free and fair,” Attorney General Paxton said. “Anyone attempting to deprive the people of Texas of their voice in either state or federal elections will be brought to justice and penalized by the full extent of the law.”

The State of Texas recognizes that voter fraud is a real threat. Fair, lawful elections are the foundation of democracy, so voter fraud has to be uncovered and the perpetrators punished to the full extent of the law.