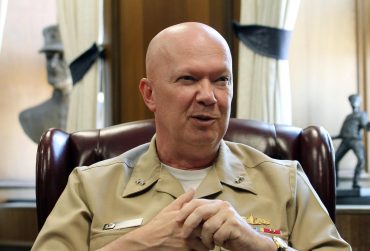 Rear Admiral Jeffrey Harley, the president of the Naval War College in Rhode Island, has shown himself to be an outstanding bureaucrat capable of financial mismanagement and unprofessional behavior deserving of a promotion to a job in Washington, D.C.; his talents are being wasted in Rhode Island. It is time for the high-level bureaucrats in DC to recognize that bureaucratic expertise is not confined to our nation’s capital. Harley is a DC bureaucrat languishing at the Naval War College but not for long.

Under Harley’s leadership, the Naval War College has struggled to make payroll and spent approximately $725,000 annually on raises while facing an annual shortfall of more than $5 million; why is Harley not working at the United States Postal Service or the Department of Veterans Affairs? It is not just Harley’s financial management skills that make him an outstanding functionary.

According to The Navy Times, multiple former and current college employees “have raised serious concerns for over a year about Harley’s conduct.” Employees claim Harley kept a margarita machine in his office, offered ‘free’ hugs, and held games of Twister in his office. No word yet on whether the booze, free hugs, and Twister combined to create naked Twister games during which hugs turned into fornication, no matter the answer, Harley is destined for greatness in DC.

As for Harley’s fiscal irresponsibility, in DC, wasting tax dollars is equivalent to breathing. A few months ago, openthebooks.com released an analysis that showed 66 agencies spent $97 billion in September 2018, the final month of the government, fiscal year, on lobster, alcohol, iPhones, furniture, and CrossFit equipment. Harley has plenty of experience spending money, he just needs to expand his bureaucratic horizon and learn to be even more irresponsible with hard-working Americans’ tax dollars.

Harley’s administrative skills make him a perfect fit for a federal department or agency that is need of an infusion of good ole bureaucratic incompetence and indifference. If Harley plays his cards right, he could soon be planning a lavish million-dollar conference in Las Vegas at taxpayers’ expense.

Based on a story released by the Associated Press, Harley is no longer president of the Naval War College and has been reassigned to a post in Washington, DC. The Navy has not revealed any details about Harley’s new position, but with his penchant for wasting tax dollars and inappropriate behavior, he’s going to do well as a DC bureaucrat no matter where he lands.