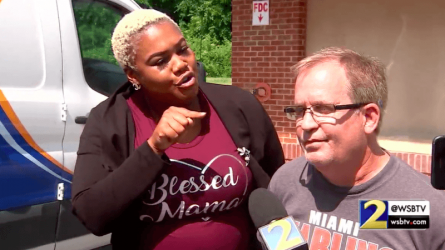 The fake hate crime hoax perpetrated by Erica Thomas and the mainstream media is now a battle between two fools who are pawns in the Democrat Party’s identity politics scam designed to divide Americans by reducing every person to his or her skin pigmentation, gender, or sexual orientation. Erica Thomas and Eric Sparkes are brainwashed; actually, most people who follow the ideology of the Left require only a light rinse, and they displayed their mental chains by turning their dispute into a war of identities.

In the video below, you will find the following exchange between Thomas and Sparkes.

Thomas – “This speaks for every black, brown, and any woman out there that’s nine months pregnant. And a white man comes up to you and calls you a son of a” (Sparkes interrupts)

Sparkes – “I am Cuban. I am not white. I was raised with a Cuban grandmother who didn’t speak any English. In the sixties and seventies, I felt racism and prejudice. I’m not playing the victim. This woman, Ms. Thomas, is playing the victim for political purposes because she’s a state legislator.

I’m a Democrat! Number 1, I vote Democrat party line. Number Two, proven facts can be proven. My Facebook, I will make it public. Proven facts all my statements are anti-Trump, anti-Republican, anti-racism, anti-bigotry. This lady does not know me!”

Let us break down the exchange between the brainwashed dupes. Thomas asserts that a white man verbally assaulted her with racial epithets, and declares that she is defending black and brown pregnant women against a white supremacist. Thomas is black, so according to Democrats, her skin pigmentation makes her a victim, and all white people are evil racists. Sparkes attempts to derail Thomas’s coming out party by revealing that he is not white. Thomas does not allow Sparkes to steal her virtue signaling thunder by screaming, “Yes, you are [white]!”

Sparkes counters Thomas’s victimhood with his proclamation that “In the sixties and seventies, I felt racism and prejudice.” He doesn’t provide any details on how racist and bigots harmed him, but people who subscribe to identity politics are not required to provide proof. Sparkes did provide “proof” that he is not racist by proclaiming he hates Trump, bizarre and pathetic.

What is sad is that Erica Thomas is a representative in the Georgia State House; people voted for her. Politicians at the federal, state and local level are the dumbest most unimpressive people in America.

What Thomas and Sparkes don’t realize is that they are dupes, and their performance art is nothing more than a distraction from real problems that plague America. Democrats don’t want Thomas, Sparkes, or any other member of their victim/voting blocs to focus on relevant, meaningful issues such as the opioid epidemic, homeless encampments in blue cities, the return of Medieval diseases to blue cities, skyrocketing crime, failing government schools, et cetera, et cetera. Democrats want people to focus on identity while they drive America off a cliff.