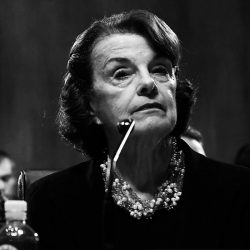 Self-deification is a delusion that afflicts numerous unimpressive, foolish politicians such as Senator Dianne Feinstein. The act of proclaiming oneself a god is quite common in America today. To be a human god is to be ‘woke’ to “universal truths” defined by human beings who subscribe to a secular religion that rejects God, natural law, and natural rights.

If a person like Feinstein is ‘woke’ it means she possesses special knowledge only available to her and her fellow gods, and with their wisdom, they are going to perfect humanity thereby ushering in utopia; utopia is Greek for “nowhere.” Feinstein’s utopian program hinges on her supernatural ability to create a safe environment for her followers and the non-believers who refuse to recognize her as a god.

It always bears repeating what the late Whittaker Chambers, a reformed Communist, wrote in his autobiography Witness.

Feinstein is a god by her acceptance of the second oldest religion, and she uses her status to push policies that she claims will shield people from hardships and danger.

Feinstein has spent three decades in Congress working to pass legislation designed to eradicate individual liberty in pursuit of a Godless, collectivist society. Feinstein is a god-figure in the religion of humanity, and her self-deification gives her the power to pursue faux humanitarian causes. Daniel J. Mahoney in his book The Idol of Our Age: How the Religion of Humanity Subverts Christianity wrote:

Humanitarianism, the softer, regnant version of the religion of humanity, is thus wholly at odds with the Christian proposition and the risks subverting it in the name of an inter-mundane eschatology. Woefully ignorant of sin and of the tragic dimensions of the human condition, it reduces religion to a project of this-worldly ameliorization.

When Feinstein introduces legislation to ban guns, she positions herself as a savior of mankind while ignoring God, original sin, human nature, and natural rights. Why does Feinstein ignore Genesis; either she is an atheist, or she thinks God failed miserably, and she has the knowledge to perfect His creation.

Human rights were part of the ideological regimes of the twentieth century that murdered 100,000,000 people (see Death By Government). Whether it was Ma Zedong’s People’s Republic of China, Vladimir Lenin, and Joseph Stalin’s Soviet Union, Pol Pot’s Khmer Rouge, or Adolph Hitler’s Nazi Germany, there was a common thread between these butchers, they all claimed to possess divine wisdom capable of realizing heaven on earth, but they knew nothing and murdered millions to conceal their ignorance; they were communists/socialists who self-deified, and people died.

Feinstein’s numerous pieces of gun-banning legislation were promulgated under the guise that she is a god and utopia is within our reach, you just have to surrender your liberty to the secular gods. Feinstein claims banning guns will end murder, she doesn’t point to any evidence, she makes a claim. The gods of England made the same claim, and they were wrong; knife attacks are commonplace in England and Wales. It appears the policies of the secular gods are worthless; therefore, they are not gods, just human beings who are unaware of their fallibility and mortality.

Pope Benedict XVI rejected self-deification and tyranny in his Bundestag address that engages Feinstein and her comrades and their secular religion. Pope Benedict insists there is an “ecology of man” that must be acknowledged by people who care for truth and human dignity. “Man has a nature that he must respect and that he cannot manipulate at will.” America’s gods repudiate the natural moral limits inherent in the human condition. Benedict asserts, “Man is not merely self-creating freedom. Man is intellect and will, but he is also nature, and his will is rightly ordered if he respects his nature, listens to it and accepts himself for who he is, as one who did not create himself.” The beginning of wisdom is to know humans are not gods. The Pope insists: “In this way, and in no other, is true human freedom fulfilled.”

Human beings who are oblivious to their nature offer those who are willing to believe in them a vertiginous exile from God and truth. Feinstein and her fellow Democrats claim they possess superhuman powers capable of creating heaven without God, all you have to do to join them is wake up to the good news. The promise the ideologues make is simple: “join us, and ye shall be as gods.”