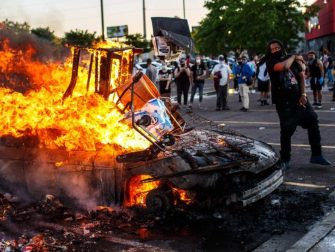 The “Peaceful Protests” are Based on a Lie

The mainstream media wants you to believe that the “peaceful protests” across America are justified because police officers target black people for extermination. Democrats implore you to believe that all police departments must be dissolved because the cops are irredeemable racists. Is it true that cops are hunting black people to eliminate them?

The riots that led to the demolition of numerous American cities owned and operated by Democrats are not about the targeting by police of black people, but rather demonstrations of force by two Marxist groups hellbent on forcing the collapse of the United States. Black Lives Matter and Antifa share in the common cause of sacking America and forcibly installing a communist regime.

The “protesters” are made up of angry, deranged, black people and guilt-ridden, self-hating, white people who were brainwashed, in most cases, they only required a light rinse, in K-12 schools and colleges and universities. The zombies who burn and loot are under the spell of a lie crafted and disseminated by the Democrats who control the mainstream media. The lie that sent the zombies into the streets was the lie about police shootings.

You will not find a single federal, state, or local law that allows for discrimination towards anyone, so how can there be systemic racism? You hear race pimps like Barack Hussein Obama declare that there is “institutional racism” in America, but never provide details. Why do you think race hustlers continue the narrative that America’s institutions are racist while demanding a bigger system, wouldn’t that make the racist system more powerful? The reason race hustlers like Al Sharpton, Jesse Jackson, and Barack Hussein Obama continue their ruse is because they’ve gotten rich off identity politics, and they hope that Black Lives Matter and Antifa can force Americans to surrender. Once Americans surrender to the mob, the race pimps think they’ll be installed as rulers with unfettered power.

Do not kneel to the angry, mentally ill thugs. It is imperative that you straighten your spine, keep your head up, and tell the truth. You will permanently damage your soul if you humiliate yourself for the pleasure of the mob. Do not believe the lie!

“An appeaser is one who feeds the crocodile, hoping he eats him last.” – Winston Churchill