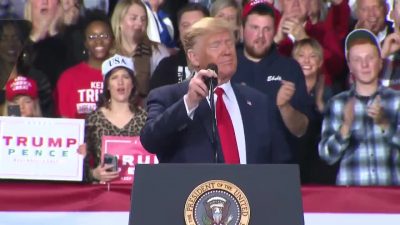 Last night, Democrats voted to impeach President Donald J. Trump for crimes created in the deficient minds of children stuck in a perpetual temper tantrum. Meanwhile, the fine people of Michigan braved frigid weather conditions to attend President Trump’s Merry Christmas Rally in Battle Creek, Michigan. At the time House Democrats were voting to impeach President Trump, thousands of people were standing in a line outside of Kellogg Arena hoping to get inside to be part of a Trump rally; the two are not mutually exclusive.

How are an impeachment vote and a rally connected? The sole reason Democrats crafted mystical crimes and pushed for impeachment is that they are desperate to damage President Trump ahead of the 2020 presidential election. Democrats are desperate because Trump’s supporters have not soured or lost enthusiasm for him or his policies. Last night, the President’s supporters filled Kellogg Arena to the rafters on a night Democrats presumed most people would cheer them for hurting the bad man. Democrats wanted to damage Trump enough to dampen the enthusiasm of his supporters in the hope that they won’t go to the polls in 2020. If last night is any indication, the Democrats’ political hit job fell flat, and the deplorable are emboldened, and their resolve to support Trump is stronger than ever.

In the former Soviet Union, Joseph Stalin used the force of the bureaucracy to punish and murder his enemies. Arguably the most committed of Stalin’s lieutenants was Lavrentiy Pavlovich Beria. Beria accepted and faithfully carried out Stalin’s orders while in various positions, including Marshal of the Soviet Union and state security administrator, chief of the Soviet security and secret police apparatus (NKVD), and as a member of the Politburo beginning in 1946. Beria also contributed to America’s Politburo.

Beria was no shrinking violet. Beria committed himself to defend the Soviet Union’s communist regime against anyone who dared utter a negative word about Stalin or his program. Beria once said to Stalin, “Show me the man, and I will show you the crime.” There was no justice or due process in the former Soviet Union; there were the state and enemies of the state, sound familiar?

Last night, Michiganders reminded their fellow Americans that America is not the Soviet Union. Americans are still free to decide for themselves who to vote for in federal, state, and local elections, which bothers Democrats. Democrats can impeach Donald J. Trump next week, and the week after that, and the week after that, but Trump’s supporters ignore the circus.  Americans who voted for Trump view Democrats as nothing more than power-hungry, entitled crybabies who are still spun up over an election they thought they had in the bag.

The video of the rally is courtesy of Right Side Broadcasting.