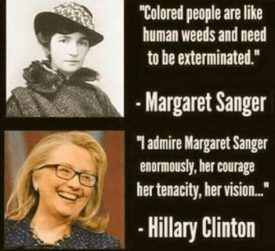 The recent passage of legislation that bans abortion in the State of Alabama elicited a collective outrage from the Left. Who knew saving unborn babies would be so unpopular, and force gods such as Andy Cohen to reserve a place in “hell” for the politicians who voted to protect all babies, including the black ones from the humanitarians who are saving black people one abortion at a time.

Emily Ratajkowski, a model of some sort, used her social media accounts to voice her opposition to Alabama’s abortion legislation by posting the following:

These men in power are imposing their wills onto the bodies of women in order to uphold the patriarchy and perpetuate the industrial prison complex by preventing women of low economic opportunity the right to choose to not reproduce.

The states trying to ban abortion are the states that have the highest proportions of black women living there. This is about class and race and is a direct attack on the fundamental human rights women in the US deserve and are protected by under Roe vs. Wade. Our bodies, our choice.

Ratajkowski asserts that preventing black women from murdering their babies is racist because if they can’t abort their unborn babies, those babies are destined for prison; racism anyone? Let us pause to remind the American people that if Democrats accuse you of something, racism, for instance, they are guilty of the very thing they accuse you of on a scale beyond comprehension; they project to deflect. The Left thinks children born to poor, black women are not capable of anything but a life of crime.

Ratajkowski claims abortion bans are about “class and race.” According to Planned Parenthood’s founder, Margaret Sanger, a hero and icon to leftists around the world, abortion is about class and race, in fact, Sanger founded Planned Parenthood to “lower the birth rate of the unfit” by aborting their babies. The Left thinks the most effective way to save black children from poverty and prison is to murder them in utero; justice is served. There’s a reason Planned Parenthood “clinics” are almost exclusively found in impoverished areas inhabited by mostly minorities. Planned Parenthood is serving up racial justice by murdering black people before they go to prison.

Legislators in Alabama were put on notice that their attempt to save unborn babies is an abomination against the Left’s god and will secure a place in hell for them. Cohen tweeted:

Where is this hell? What is progressive hell like? Is Cohen a god who decides who goes to progressive hell? Either Cohen is guilty of self-deification, or he created a personal god who approves of murder and sodomy. Whatever the case, Alabama’s legislators sinned against Cohen or his god, so they are doomed.

According to Democrats, abortion is noble and necessary to achieve racial justice. Ratajkowski, Cohen, and those of their ilk think that allowing black babies to exit their mothers’ wombs is racist. Thou shalt murder the undesirable, especially the black ones.