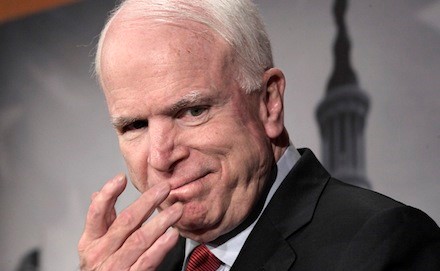 Two RINOs, Senators John McCain and Ron Johnson, introduced as co-sponsors S.1040, an unconstitutional, treasonous immigration bill designed to transfer the federal government’s constitutional responsibility for immigration to the states to deliver a perpetual stream of foreign workers to the United States to satisfy the demands of McCain and Johnson’s corporate donors; the U.S. Constitution and American workers be damned! 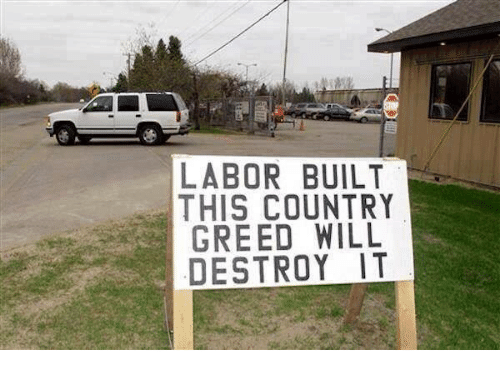 Article I. Section 8 of the Constitution provides Congress with the power “to establish a uniform rule of naturalization” to govern the admittance of foreigners to the United States with a process for citizenship. In today’s America, immigration laws are nothing more than window-dressing because America’s borders are open and corporations’ unquenchable thirst for cheap labor supersedes all immigration laws. The legislation McCain and Johnson co-sponsor is an attempt to create a state-sponsored visa program that shifts authority and enforcement of a visa program from Congress to the states; the legislation is unconstitutional and unnecessary.

By the laws of several States certain descriptions of aliens, who had rendered themselves obnoxious, were laid under interdicts inconsistent not only with the rights of citizenship but with the privileges of residence. What would have been the consequence, if such persons, by residence or otherwise, had acquired the character of citizens under the laws of another State? The new Constitution has accordingly, with great propriety, made provision against them, and all others proceeding from the defect of the Confederation on this head by authorizing the general government to establish a uniform rule of naturalization throughout the United States.

McCain and Johnson disagree with Madison and think the fifty states can easily manage a visa program that provides for 755,000 foreign workers and their families in the first year and more after that.

McCain and Johnson’s legislation is the most ambitious, traitorous immigration bill in the history of the United States. The legislation allows an initial pool of 500,000 workers aside from the 5,000 for each state and Washington, D.C. The legislation sets a “cap” for visas at 500,000 per year, but the cap excludes the spouses and children of the workers and provides for employment authorization for spouses and children. “The numerical limitation shall apply only to principal aliens being admitted to the United States from abroad and not to others accompanying or following to join the principal alien;” chain migration on steroids. The cap only applies to new admissions and not visa renewals for previously admitted aliens, so 500,000 new “temporary” workers can be added each year, plus their spouses and children. The legislation also grants states the ability to increase the number of foreign workers by ten percent in each fiscal year “immediately following a fiscal year in which less than three percent of the state-sponsored nonimmigrants violated the terms and conditions of state-sponsored nonimmigrant status.”

Although the bill refers to the aliens as “temporary” workers sponsored by states to work for a period not to exceed three years, there is nothing temporary about the workers. The legislation is a path to permanent residency for those who enter the U.S. under the program, and it provides amnesty for illegal immigrants who already reside in America.

S.1040 furnishes a path to permanent residency by allowing the visa recipients to submit a petition for lawful, permanent residency. However, beyond the ability to gain permanent residency as part of the program is a path to legalization for the illegal immigrants who were present before the start of the program. The proposed legislation requires the Secretary of the Department of Homeland Security to “waive the grounds of inadmissibility and the grounds of deportability on behalf of an alien,” if a state sponsored the alien and requested a waiver. This directive to provide exemptions applies to illegal aliens in general; visa overstays, student visa abusers, aliens who failed to appear in court for immigration hearings, and aliens previously ordered removed, etcetera, etcetera. The bill allows for illegal immigrants “physically present in the United States on December 31, 2016” to participate in the state-sponsored visa program; this is amnesty.

The legislation is not a visa program; it is an amnesty bill disguised as a visa program that provides cover for corporate chattels such as McCain and Johnson to avoid accountability by making states responsible for unpopular actions such as arbitrarily providing amnesty to illegal immigrants. The states are not capable of developing and administering a visa program nor is any facet of immigration the responsibility of the states. The bill on its face is unworkable as far as states operating a visa program for workers attempting to gain entry to the U.S. to work, but the states can easily rubber stamp applications from illegal immigrants already residing in the United States. The state-sponsored visa program is designed to provide immunity from deportation for illegal immigrants and an avenue to permanent residency for the aliens who participate in the program. McCain and Johnson have crafted a bill that will protect the illegal workers of their corporate donors and supply the donors with a never-ending, ever-increasing supply of cheap labor.