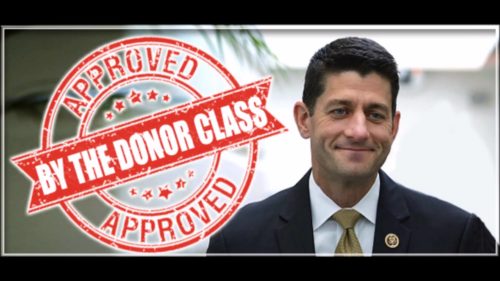 Paul Ryan is Committed to Delivering Amnesty for Illegal Aliens

Speaker Paul Ryan (RINO -WI) is committed to delivering amnesty for illegal aliens because his corporate donors paid him for amnesty. Ryan will go to any length to give his donors what they bought, including slipping DACA amnesty into a spending bill. 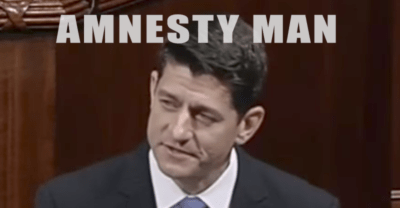 Ryan made it clear during a talk in front of the Republican Study Committee (RSC) that he plans to add amnesty for the Deferred Action for Childhood Arrivals (DACA) illegal aliens into an end-of-year expenditures bill. Why would Ryan attempt to insert amnesty into any piece of legislation? Progressives like Ryan could just introduce legislation that strictly addresses amnesty for the innocent, docile DREAMers instead of resorting to sneaky tactics whereby amnesty is part of a spending bill; if amnesty is what the American people want for illegal aliens, then Ryan can sponsor legislation exclusive to amnesty.

Why is Ryan reportedly planning on slipping amnesty for illegal aliens into a spending bill? You can find the answer by visiting the Federal Election Commission‘s (FEC) website. The most recent FEC data on Ryan’s receipts show that at the end of September, he received contributions from Wawa, Inc. Political Action Committee (PAC), Wal-Mart Stores, Inc. PAC, and Tyson Foods, Inc PAC. What do you suppose these corporations want for their donations?

Wawa, a minimum wage business, owns dairy processing plants and convenience stores in multiple states; Wawa doesn’t do business in Wisconsin. Wal-Mart is known for employing illegal aliens and once paid an $11 million fine to settle allegations levied by federal prosecutors and immigration officials that the store chain employs illegal workers. Tyson Foods has a long, checkered past riddled with lawsuits and federal indictments related to its practice of employing illegal aliens. The Tyson Foods story includes a 36-count indictment for “conspiring to smuggle illegal immigrants across the Mexican border to work in its processing plants.” In court filings, federal prosecutors accused Tyson Foods, Inc. of “arranging to transport illegal immigrants across the border and helping them to get counterfeit work papers for jobs at more than a dozen Tyson poultry plants.” Tyson will do anything not to hire American workers, including setting up PACs to funnel money to politicians such as Ryan to buy immunity from federal immigration laws for its illegal workers.

Wawa, Wal-Mart, and Tyson Foods know the politicians who exchange legislation for cash. Ryan has spent eighteen years in Congress with a for sale sign on his forehead. He is not a representative of the people; he is corporate chattel doing the bidding of his masters.