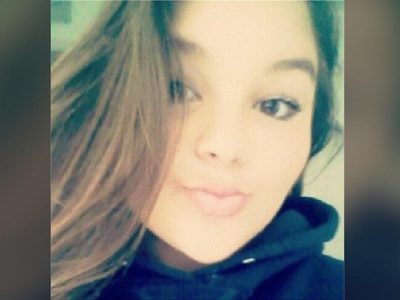 An Illegal Alien, Politicians, Corporations, and a Girl from New Jersey

Madison Wells (16) is dead because of the willful negligence of politicians. Wells was stabbed to death by an illegal alien from Guatemala who is in the United States because politicians refuse to secure America’s borders and enforce U.S. immigration laws.

Bryan Cordero-Castro (20) is in police custody and has been charged with murder. Cordero-Castro is a ‘DREAMer‘ from Guatemala was able to fulfill his dream of murdering another human being because of politicians’ thirst for power and corporations’ unquenchable thirst for cheap labor. Wells’s murder is another example of the fatal consequences of the Washington, D.C. business model that enriches politicians and corporations to the detriment of the American people.

The Republican Party enjoys a majority in the U.S. House of Representatives and the U.S. Senate, yet the party that purports to care about border security and the American people sits idly by while Americans such as Madison Wells, Charles Byrdic, Kate Steinle, Mollie Tibbetts, et al. meet their demise at the hands of illegal aliens who enjoy immunity from U.S. immigration laws. Why do you suppose politicians ignore the murders, rapes, robberies,  and numerous other criminal acts perpetrated by illegal aliens?

Republicans and Democrats are accomplices to every crime committed by an illegal alien, including the crime of entering America illegally. A glance at the campaign donations of any national politician is the key to understanding why Wells is just a girl from New Jersey. The following is an abbreviated list of recent 2018 campaign donations to Senate Majority Leader Mitch McConnell:

The aforementioned corporations depend on foreign labor, legal and illegal, to avoid hiring Americans who cannot afford to work for minimum wage. Senator McConnell and his colleagues.trade their indifference towards America’s dying middle class for campaign donations.

84 Lumber is a company that has an insatiable appetite for cheap labor. You might remember 84 Lumber’s Super Bowl advertisement that encouraged foreigners to enter the U.S. illegally and head to the nearest 84 Lumber location for a job. A review of 84 Lumber’s contributions (courtesy of Open Secrets) to politicians shows that it is not a passive proponent of illegal immigration. The following is a break down of 84 Lumber’s past contributions:

84 Lumber hires people like Bryan Cordero-Castro and depends on the politicians who receive its contributions to protect its steady stream of illegal alien labor from Mexico and Central America. 84 Lumber doesn’t just encourage illegal border crossings it pays for them.

Madison Wells and the hundreds of thousands of Americans who’ve been victimized by illegal aliens are irrelevant to the mafia bosses who inhabit Congress because they don’t make significant, ongoing campaign contributions in exchange for protection. Wells is not part of the business model created by members of Congress, so she is just a girl from New Jersey.