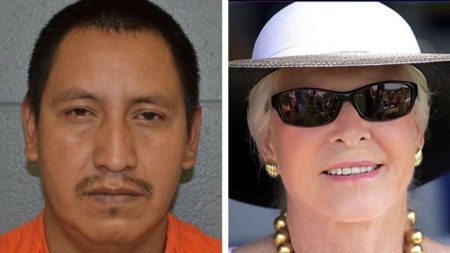 On November 15, 2018, Lois Colley became another casualty of America’s political establishment when Esdras Marroquin Gomez (34), an illegal alien from Guatemala, murdered her by hitting her in the face with a fire extinguisher repeatedly. Due to the unwillingness of America’s political class to secure our southern border, at some point in 2006, Gomez entered the United States and was able to stay without the threat of deportation.

Unfortunately, for Colley, Gomez’s illegal trek through America led him to New York. and the Colley family’s 300-acre estate. Once Gomez made his way to New York, he secured a job as a day laborer on the Colley family farm despite his unlawful presence in the United States. It was Gomez’s time as a laborer that led to a confrontation with Colley. According to Gomez’s attorney, “In 2013, he [Gomez] badly cut his leg in an accident with a chainsaw on the Colley property. After recovering from his injury, he tried to return to work, but Colley informed him he was no longer needed.” Gomez proclaimed to Colley that she did need him by bashing her face with a fire extinguisher.

Four days after Gomez murdered Colley, he caught a flight from JFK Airport to Guatemala. Politicians and government bureaucrats give illegal aliens carte blanch to enter and exit the U.S. without any obstacles such as immigration laws to hamper their movement, so Gomez hopped on a plane to his home country after he murdered Colley.

Getting away with murder is rather easy when a person can move across national borders freely. Fortunately, when Gomez’s flight stopped in Miami, FBI agents who take crime seriously and reject any notion that illegal aliens are a protected class arrested him.

On June 13th, Gomez was sentenced to 22 years to life in prison for the murder of Lois Colley, but the politicians who are indifferent to the suffering of Americans at the hands of illegal aliens were held blameless.