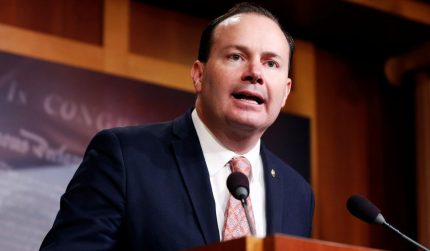 Last year, Senator Mike Lee (R-UT) introduced a bill (S. 386) that increases the number of employment-based immigrants and family-sponsored immigrants. Mike Lee, aka, Google’s Puppet, titled his bill the “Fairness for High-Skilled immigrants Act,” and is designed to deliver more cheap labor to corporations that participate in the pay-to-play system created and maintained by national politicians who prefer campaign donations over American workers.

Lee’s legislation eliminates the per-country numerical limitation for employment-based immigrants, to increase the per-country numerical limitation for family-sponsored immigrants, and for other purposes. The legislation is touted as a humanitarian act because it is supposed to provide relief for at least 600,000 Indian contract workers and family members who are waiting for green cards promised them years ago by employers such as the covert U.S.-India Outsourcing Economy. Subcontractors like U.S.-India Outsourcing Company lease foreign workers to numerous “American” companies, including Cisco, Boeing, Dell, Marriott, PepsiCo, Caterpillar, Adobe, et. al. The foreign workers who have yet to receive green cards hold jobs formerly held by American graduates who were displaced in favor of cheap, foreign labor bought by corporations that own the politicians who push legislation to satisfy their corporate masters.

If S. 386 becomes law, it will eliminate country caps thereby providing more work permits and green cards to countries such as India. Lee and his co-sponsors want to make it possible for outsourcing companies in India to dangle more U.S. work permits and green cards in front of their workers to motivate them to work for low wages by promising them U.S. visas. The Indian pipeline of cheap labor to American-based companies annually denies hundreds of thousands of American graduates entry-level jobs and allows companies to terminate employees who are well-established in their careers and enjoy a salary that allows them to take care of their families. The message from Lee and his corporate masters to recent STEM graduates is “Do not apply.” The message to Americans currently employed by companies like Google, Cisco, and FedEx is “Your days are numbered.”

Lee and the co-sponsors of S. 386 do not think enough Americans have been brought low by unemployment, so they introduced a bill to assist the corporations and outsourcing companies who work together to destroy the livelihoods of countless Americans. The following is a list of Senate Republicans who co-sponsored Lee’s legislation:

The Republicans mentioned above willingly penned their names to a piece of legislation that harms American workers. S. 386 is the type of legislation that leads one to conclude that American workers are not represented in Congress. Most politicians in Washington, D.C. are nothing more than corporate chattel whose entire life’s work is about pleasing their corporate masters. Senator Mike Lee is willing to destroy Americans’ lives to keep his campaign coffers full.