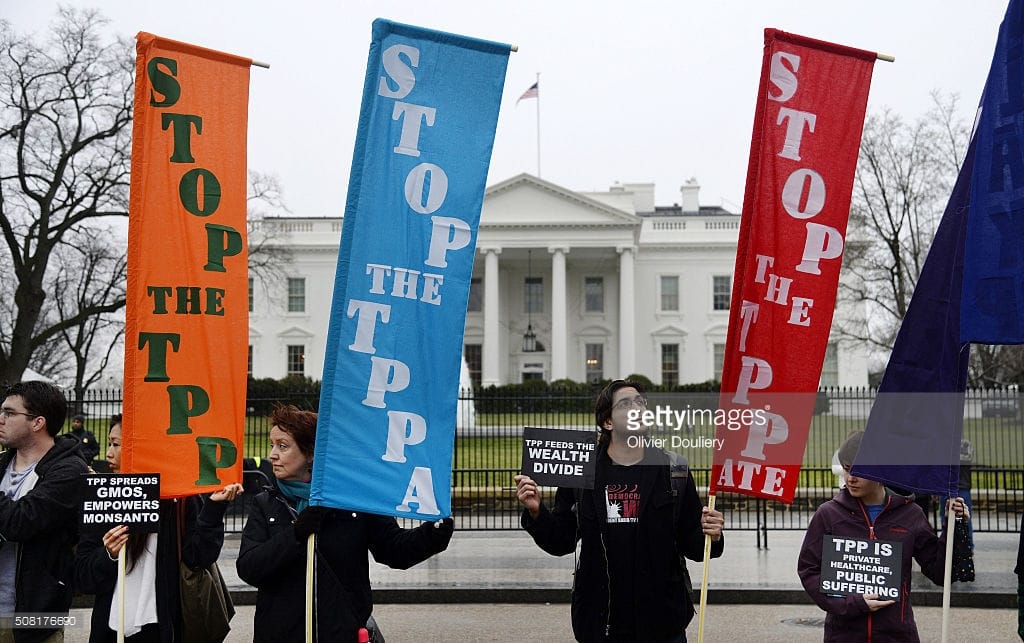 The Republican establishment has turned free trade into a religion. It is not a religion borne out of a political ideology, it is a religion bought and paid for by corporatists who are committed to moving every job out of the United States into third world countries, so they can access cheap labor to manufacture products that enjoy tariff-free access to the U.S. market.

The Trans-Pacific Partnership (TPP) is another trade agreement designed by the internationalists/corporatists to further erode America’s sovereignty. The TPP creates “conflict resolution tribunals” (courts) that will have the power to overrule federal, state, and local laws, and will have sole jurisdiction to settle all disputes. The idea of an international court dictating political policy of the United States seems outrageous, right? It has been happening under the North American Free Trade Agreement (NAFTA).
Mexico and Canada filed a lawsuit with the World Trade Organization (WTO) claiming that America’s Country of Origin Labeling (COOL) law, which requires foreign meat products to have labels that alert American consumers to their foreign origin, is an unfair and illegal trade practice under NAFTA. On May 18, 2015, the WTO appellate tribunal ruled in favor of Mexico and Canada. Mexico and Canada plan to seek authorization from the WTO to impose $3 billion in sanctions against U.S. exports in retaliation. The WTO is deciding U.S. policy regarding products purchased by U.S. consumers. This will also be the case with TPP.
The TPP is not designed to be a static agreement, instead it is a ‘living’ agreement. As reported by The New American, “On November 12, 2011, the leaders of the TPP nations endorsed the TPP Trade Ministers Report to Leaders, which states, inter alia: ‘We have agreed to develop the TPP as a living agreement… Therefore, the TPP teams are establishing a structure, institutions, and processes that allow the agreement to evolve… We envision a continuing joint work program, including new commitments.’ ” When your elected “leaders” vote “yea” for TPP, they are voting in favor of America being bound to the rules promulgated by international bureaucrats, with any disputes between members settled by the institutions of the TPP or the WTO. Any politician that votes for TPP is a traitor who is choosing to sacrifice America and its people at the international altar of ‘free trade.’
How much is America’s sovereignty worth to your senators? The U.S. Senate passed Trade Promotion Authority (TPA), which gives Obama sole authority to negotiate TPP. On May 14, 2015, fast-tracking authority for TPP passed the Senate by a vote of 62-38. The Guardian reports that the passage of TPA for TPP passed the Senate because of donations to senators from multinational corporations.

The Guardian used data from the Federal Election Commission that revealed donations from corporate members of the U.S. Business Coalition for TPP. Click here for the list of donations. The list contains donations made to U.S. Senate campaigns between January and March 2015, which is when TPA for TPP was being debated.

The following is a list of senators who secured generous donations for their votes:
The corporate chattel that secured more tainted money than any other senator was Rob Portman (R – OH). Free trade has become a religion for establishment Republicans and Portman is the pope.
Portman received $119,700 in campaign donations from 14 different corporations between January and March 2015. Portman did quite well for himself.
There were five Republican senators who voted against TPA. Senators Lee, Collins, Shelby, Sessions, and Paul voted against TPA. This is rare considering I’m sure they got squeezed by the Republican establishment and the U.S. Chamber of Crony Capitalism. I would venture to guess plenty of multinational corporations sent their lobbyists to these senators’ offices to offer up campaign donations for “yea” votes on TPA.

The vote in the Senate on TPA is a shining example of how the greater majority of national politicians are for sale. They do not represent the people of their states or the United States, they represent their campaign donors and bundlers. Their sole focus is on enriching themselves while they are in office, and setting themselves up for lucrative jobs as lobbyists for the corporations that bought them while they were in office.