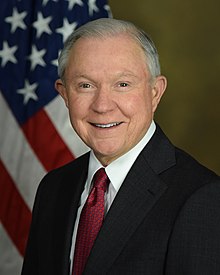 After Jeff Sessions, Get Ready for Armageddon

President Trump asked Attorney General Jeff Sessions to tender his resignation, and he complied, then Trump supporters cheered because they think Sessions’ departure effectively ends Robert Mueller’s investigation into possible collusion between candidate Trump and Russia. It is difficult to envision a scenario where the Russia investigation suddenly ends and President Trump is left to his own devices. Sessions’ departure will not affect the Russia investigation, but it will have a dreadful effect on America and the American people.

Sessions was the only member of the Trump administration who supported President Trump’s America First agenda in words and actions. The President and the Republican-controlled House and Senate failed the American people by do nothing to secure our southern border or pass legislation to end nonsensical policies such as “catch and release,” birthright citizenship, the diversity visa lottery, chain migration, et cetera.  Sessions did everything he could to implement and enforce Trump’s immigration agenda, with no help from Congress or the White House.

Sessions did everything in his power to keep the promises candidate Trump made to his voters. Sessions did the following and more to restore law and order to a broken, irrational immigration system:

Sessions did something no previous AG did, he issued a zero-tolerance policy for illegal border crossers. Sessions ordered all U.S. Attorney’s Offices along the southwest border to enforce 8 U.S.C.  1325(a), which prohibits both “attempted illegal entry and illegal entry into the United States” by an alien. Sessions provided the following statement on his zero-tolerance policy:

The situation at our Southwest Border is unacceptable. Congress has failed to pass effective legislation that serves the national interest—that closes dangerous loopholes and fully funds a wall along our southern border. As a result, a crisis has erupted at our southwest border that necessitates an escalated effort to prosecute those who choose to cross our border illegally. To those who wish to challenge the Trump Administration’s commitment to public safety, national security, and the rule of law, I warn you: illegally entering this country will not be rewarded, but will instead be met with the full prosecutorial powers of the Department of Justice.

America’s southern border is wide open and the only person in Washington, D.C.committed to defending America’s borders and punishing those who ignore federal immigration laws is gone.

Politicians are unwilling to address catch and release loopholes intentionally created by statutory and judicial obstacles designed to prevent the enforcement of federal immigration laws by forcing the Department of Homeland Security (DHS) to release illegal aliens into the interior of the United States with court dates that are ignored. Congress refuses to pass legislation to end the practice of catch and release, so Sessions leaped into action.

Sessions allocated thirty-five (35) Assistant U.S. Attorney positions to U.S. Attorney’s Offices along the southwest border and added eighteen (18) current supervisory immigration judges to adjudicate cases in immigration courts near the southwest border. Sessions made it possible to avoid the release part of catch and release by adding resources to adjudicate cases at the scene of the crimes quickly.

The American people made very clear their desire to secure our borders and prioritize the public safety and national security of our homeland. Promoting and enforcing the rule of law is essential to our republic. By deploying these additional resources to the southwest border, the Justice Department and the Trump Administration take yet another step in protecting our nation, its borders, and its citizens. It must be clear that there is no right to demand entry without justification.

Sessions was not a passive observer during his time as attorney general, nor did he make excuses for why the DOJ could not enforce immigration laws. Sessions, unlike his predecessors who ignored America’s ongoing immigration crisis, a crisis that is well on its way to transforming the United States into global real estate, staunchly defended America’s sovereignty by prosecuting foreign invaders.

Please name another AG who cracked down on corporations that discriminated against American workers by hiring illegal aliens or visa workers. Eric Holder? Loretta Lynch? Janet Reno? John Ashcroft? Alberto Gonzales? Never in the history of the United States of America has an attorney general dared to challenge the political establishment and their corporate donors by cracking down on their illegal hiring practices.

Most American corporations have an unquenchable thirst for cheap labor, and they’ve purchased politicians to ensure that they can try to quench their thirst by shunning American workers in favor of foreign workers from third world countries. All you have to do is visit the Federal Election Commission’s website (fec.gov) and search the donation receipts of any politician to examine an overwhelming amount of evidence that points to a corrupt political system that favors corporations over individuals. The DOJ under Sessions’ leadership investigated the hiring practices of some of the members of Congress’s pay-to-play system and subsequently punished them for their transgressions.

Unfortunately, there is an element of groupthink that afflicts Trump supporters in the same way it afflicts the zombies on the Left. You’d be hardpressed to find a Trump supporter who doesn’t think Sessions needed to go and there is little room for dissent. However, there are a few sentient beings who support Trump’s immigration agenda who are willing to evaluate Sessions’ departure, not based on how it affects Trump but rather how it affects America.

In an interview with SiriusXM Patriot’s Breitbart News Daily, Heather Mac Donald told Breitbart News Editor-in-Chief Alex Marlow that Sessions was the only member of the Trump administration that was “absolutely staunch in speaking up for the right of Americans to determine what the character of their country should be.” Mac Donald relayed her concern for America’s future by stating:

There’s no one in the administration any longer that has any record of understanding again how mass, unchecked, illegal immigration is hurting the working class of this country and transforming our culture possibly beyond recall.

There are thousands of Central Americans heading to our southern border, in what the mainstream media describes as “caravans” bringing military heroes, entrepreneurs, scientists, astronauts, to save America and the situation is even bleaker now that Sessions is no longer in charge of processing bogus asylum claims.

Sessions is gone, get ready for Armageddon.