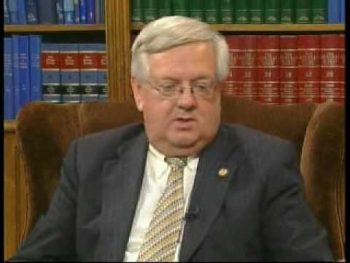 Robert Mueller has spent decades abusing his power as an Assistant U.S. Attorney and FBI Director. Mueller views the government as a weapon to use against his critics and political enemies. Former Congressman Curt Weldon is someone who dared to criticize the Federal Bureau of Investigation (FBI) while Mueller served as its director, a decision that ended his time in Congress.

After jihadists flew planes into the World Trade Center, Weldon made it his mission to find out why federal government agencies failed to discover and prevent 9/11. During a number of speeches on the floor of the U.S. House of Representatives, he claimed there was documentary evidence to prove that 9/11 could have been prevented if the FBI had done its job; this is speaking truth to power, unlike the cyber-jackals on the Left who speak online power to truth with venomous, inane tweets.

Weldon did not mince words when he criticized the failings of the agencies that were tasked with protecting the American people from terrorists. He did not shy away from revealing the fatal incompetence of the FBI and the Central Intelligence Agency (CIA). The following is an excerpt from a speech Weldon gave on the House floor on October 19, 2005:

So, now we know, Mr. Speaker, that military intelligence officers working in a program authorized by the Chairman of the Joint Chiefs of Staff, the general in charge of Special Forces Command, identified Mohammed Atta and three terrorists a year before 9/11, attempts to transfer that information to the FBI were denied by the FBI.

Weldon gave numerous speeches recounting what he knew about the failures of the FBI and CIA leading up to the plane hijackings that struck the World Trade Center, the Pentagon, and the plane that crashed in a field in Pennsylvania. He tried to hold those accountable in the FBI and CIA that he felt mishandled actionable intelligence that could have thwarted the 9/11 terrorists thereby saving 3,000 American lives. Weldon’s criticism of the FBI did not go unnoticed or unpunished by FBI Director Mueller.

In 2006, the FBI abused its power to derail Weldon’s re-election bid. Before 2006, Weldon had easily won ten (10) re-elections by sizeable margins, and according to polls leading up to election day 2006 he was well ahead of his opponent. However, three weeks prior to the election, a national story ran about Weldon based on information from anonymous sources that an FBI investigation was underway against him and his daughter alleging “illegal activities” involving his congressional work.

Weldon did not receive prior notification from the FBI that he was under investigation nor did his daughter, Karen. A week after the state media broke the story that Weldon and his daughter were under investigation, the FBI conducted an early morning raid on his daughter’s home, sound familiar? Surprise, surprise, state media outlets were provided with advanced notice of the raid and were in place to film the Deep State’s raid; they failed to stop the 9/11 terrorists, but they were able to intimidate a young woman who posed no threat to anyone or anything.

In the weeks that followed the FBI’s announcement that Weldon was under investigation, state media broadcast multiple stories alleging that there was no way Weldon wasn’t under intense scrutiny by the FBI, and it was only a matter of time before he’d be indicted for crimes that had yet to be revealed, it didn’t happen. Neither Weldon or his daughter were charged with a crime, but the cloud that hung over the Congressman’s head led to his defeat at the ballot box; mission accomplished for the FBI.

To this day, nobody at the FBI or any other law enforcement agency has spoken with Weldon or his daughter about the “investigation” that turned out to be a ruse. One year after jackbooted thugs raided Karen Weldon’s home, the FBI called her to let her know she can pick up the property they seized from her; there was no follow up, no questions, no explanation for the raid or investigation that never took place.

FBI Director Mueller presided over a hit job against Congressman Weldon, the FBI’s most prominent critic, to punish him for his unwillingness to submit to the Deep State. Weldon’s mistake was that he made enemies of corrupt, devious, career bureaucrats who operate outside the law. Weldon did not survive the dictatorial tactics used against him. On the other hand, today, Mueller is conducting a witch hunt against the President of the United States as an unaccountable, supreme, special counsel.