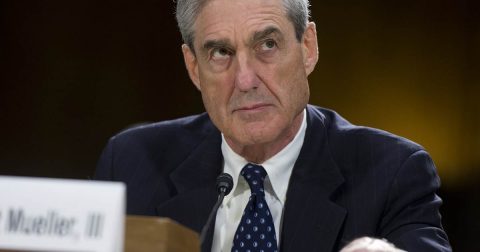 Robert Mueller is two years into his investigation as to whether than presidential candidate Donald J. Trump conspired with Russia to win the 2016 presidential election and there is no end in sight. Two years and tens of millions of taxpayers’ money spent you’d think we’d have something more than process crimes and the usual statements from the mainstream media and establishment politicians that Mueller is a “man of integrity” and we must let him do his job; they never expound on their claim, they just make the claim that Mueller is a man of integrity.

Unfortunately, for anyone in Mueller’s cross-hairs, he is void of integrity, so they can expect third-world dictator-type treatment from a deep state bureaucrat who has a history of railroading innocent people.

Mueller’s time as the Director of the FBI is riddled with corruption and evil actions that destroyed people’s lives; the late Senator Ted Stevens was one of Mueller’s victims.

The late Senator Ted Stevens, a Republican from Alaska, lost his re-election bid in 2008 when 100 days before the election he was indicted for a crime he did not commit, which tipped the scales against him; eight days before election day, corrupt, federal prosecutors convinced jurors to find him guilty.

The allegation made against Senator Stevens was that he did not pay full price for improvements to his cabin in Alaska. In reality, Stevens overpaid for the renovations to his cabin. Stevens and his wife had spent more than $160,000 for renovations that independent appraisers valued at less than $125,000 at the time; the prosecution was undeterred by the appraisal.

Mueller’s FBI failed to provide critical pieces of evidence to Stevens’s defense team. However, the worst miscarriage of justice occurred when FBI agents made sure the jury never heard from a witness, a renovation foreman named Rocky Williams, who was prepared to testify that Stevens handled the construction job appropriately.

During Stevens’s trial, FBI agents sent Williams back to Alaska. The testimony that would have exonerated Stevens was placed out of reach from his defense team by Mueller’s agents, one of those agents was Mary Beth Kepner.

The unlawful actions of the lead investigator, Mary Beth Kepner, were eventually revealed by an FBI agent turned whistleblower named Chad Joy. Joy alleged that Kepner hid information that Stevens’ legal team should have been entitled to review, leaked grand jury testimony of a government witness, and didn’t document interviews. The following is an excerpt from Joy’s complaint:

Overall, SA (Special Agent) Kepner mishandled her sources by becoming too close to each of them. SA Kepner would meet with sources in her home and have dinner with them and her husband at her home or their house. Kepner unnecessarily disclosed details about FBI investigations, unnecessarily provided information related to FBI techniques and internal workings, and would accept things of value from sources. Kepner documented very little in FBI files.

Joy chose to do the right thing and expose the nefarious actions of Kepner. How did Mueller’s FBI respond to Joy’s complaint; Joy was punished. Orders came down from on high that Joy was not to participate in any criminal investigation again, which is the FBI’s management team’s way to force an agent out of the FBI. Joy eventually left the FBI, and Kepner retained her position and continued to work for the FBI.

After a special investigation launched by a federal judge produced a blistering report that detailed the corruption of the FBI and DOJ, Stevens’s conviction was overturned. Unfortunately, justice came too late for Stevens.

In August of 2010, former Senator Stevens died in a plane crash. He would never have boarded the doomed plane if he had not lost his re-election bid. The FBI’s unscrupulous investigation and an inappropriate prosecution by the DOJ, took Stevens away from the U.S. Senate thereby setting in motion events that altered and eventually ended his life.

Another victim of the witch hunt was a DOJ lawyer, Nicholas Marsh, who in September of 2010 committed suicide in the midst of the special investigation that revealed the unethical behavior of the FBI and DOJ. The report reads, “no conclusion as to his (Marsh) conduct,” given his untimely death.

Unfortunately, Stevens is only one of several people who have felt the wrath of the FBI under Mueller’s leadership.

Mueller’s integrity is a myth like unicorns. Stay tuned…