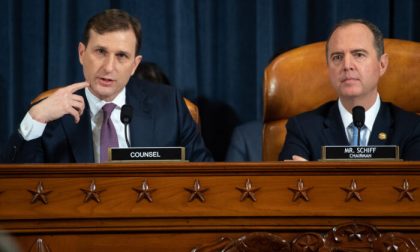 Some Democrat donors bought their way into the ongoing coup taking place in Washington, D.C., and one of those donors is Daniel Goldman. Goldman is part of an “investigation” designed to punish Democrats’ arch-enemy, President Donald J. Trump. Goldman is a Democrat donor who donated his way to a job as one of the partisan, rogue attorneys tasked with  fabricating crimes as part of his political party’s plan to turn democracy on its head by overthrowing a lawfully elected president,

Yesterday, Goldman testified in front of one of the House impeachment committees, at this point, Democrats in the House have turned every committee into an impeachment committee, to plead with members to remove Donald J. Trump as President of the United States for the crime of winning an election. During the testimony, Representative Matt Gaetz (R-FL) exposed Goldman as a partisan activist who hates Donald Trump and has provided tens of thousands of dollars to Democrat candidates (see video below).

The following is an exchange between Rep. Gaetz and Goldman:

Goldman: I’m here to present the report we did on our investigation, which was totally and completely reliant on the actual evidence we uncovered, the witness testimony, and the documents.

Gaetz: Are you a partisan?

Goldman: I’m not a partisan.

Gaetz: Do you make political donations?

Gaetz: You’ve given tens of thousands of dollars to Democrats, right?

Goldman did not respond to Gaetz’s statement about his campaign donations. When Gaetz pointed out to Goldman that his comrade, Barry Berke, has donated hundreds of thousands of dollars to Democrats and his contributions might be why he has played a more significant role in the Democrats’ third-world coup, he didn’t respond; instead, he stared down Gaetz.

Here is a lengthy, abbreviated list of the donations that allowed Goldman to secure a position on the coup team:

This abbreviated list of campaign donations to Democrats provides overwhelming evidence that Goldman lied when he told Gaetz he is not partisan. Goldman is a liar who is on a mission to assist his comrades in Congress in their mission to rid themselves of Donald J. Trump in the hopes they can clear the way for a Democrat to capture the White House. Goldman and his comrades are not confident that they can beat President Trump at the ballot box, so their thirst for power compels them to impeach him.

When a political party has nothing to offer voters, it has no choice but to destroy its enemies, real and perceived. Corruption and tyranny go hand and hand with an unquenchable thirst for power.

Note: You can find the rest of Goldman’s donations at opensecrets.org.