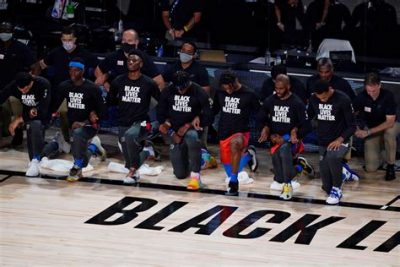 NBA Players are Racists Who Suffer from Delusions of Grandeur

The National Black Association (NBA), formerly known as the National Basketball Association, is a moribund, racist sports league trapped in a tsunami of ‘wokeness.’

The NBA has morphed into a “social justice” organization that occasionally conducts sporting events as a distraction from its routine racist, anti-American activities. However, the players found a way to display their ignorance before and during games which resulted in abysmal television ratings. The new woke NBA is averaging 1.28 million viewers per game. The population of the United States, including illegal aliens, is approximately 350 million, which means only 0035 percent of the population is watching NBA games. So why do the fools bouncing a ball think they are so important? If the NBA folded would society collapse?

For those of you who don’t watch NBA games, which is all of you, you missed out on the best humanity has to offer such as the kind words a player named Montrezl Harrell yelled. In the video below, you’ll see Harrell call Luka Doncic a “bi^ch ass white boy” during another game that only .0035 percent of the U.S. population bothered to watch. Black Lives Matter (BLM) approves of Harrell’s comment, but unfortunately for the NBA, there are not enough BLM members to pull its ratings out of the basement.

Maybe if players refuse to play games, the decaying league will find more viewers? Players on a team called the Toronto Raptors discussed “boycotting” a game to show they are upset that police officers in Kenosha, Wisconsin shot a wanted man named Jacob Blake after he assaulted two officers and ran to his vehicle to grab a knife. The Raptors players held a team meeting to discuss how to respond to the shooting of a man wanted for third-degree sexual assault, trespassing, and disorderly conduct in connection with domestic abuse. According to ESPN, another entity dying from wokeness, during the meeting the Raptors players discussed the possibility of not playing the team’s upcoming game. Yes, because Americans take their bearings from mentally deficient people who run around bouncing a ball yelling racial slurs, so the loss of a single basketball game will leave them confused and afraid.

What would happen if every NBA player refused to play, answer: nothing. If the NBA folded, based on the NBA’s television ratings, nobody would notice. If the NBA disappeared, Americans would continue living their lives unaffected by the loss of the ability to see players kneel for America’s national anthem while wearing BLM t-shirts to show their approval of the Marxist organization’s long list of crimes, including murder, arson, assault, and theft. Unfortunately, NBA players suffer from delusions of grandeur, so they think their opinions reign supreme in the minds of Americans.

A person who suffers from delusions of grandeur can’t tell the difference between reality and fiction. It is normal for a person who experiences delusions of grandeur to create his version of reality and put himself in the center of his alternative universe.  Delusions appear in many forms. The most common delusion recreates the afflicted as an omnipotent god who possesses more power, influence, intelligence, and other grand traits that do not correlate with reality. For instance, basketball players might think playing a game transforms them into geniuses who hold sway over 350 million people.

The NBA is a defunct league that should officially change its name to the National Black Association. The racists who suffer from delusions of grandeur have set a course for the NBA that ends in an earth-shattering explosion of wokeness. NBA players must burn down the league to show their solidarity with their comrades who burned down numerous American cities.