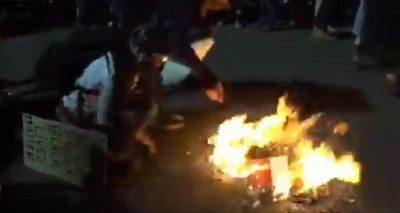 The Democrat Party is the Party of Satan, but they’ve always made an effort to conceal their hatred for God and their allegiance to Satan. However, Democrats have dropped their facade and made it clear that they collectively worship the Prince of Darkness.

When you watch the Democrats who spend their days and nights burning and looting American cities, you see that they are the foot soldiers who are working with Satan to destroy God’s creation. We cannot rule out that most of the angry, pampered narcissists who want to ‘burn it down’ are unaware that they’ve been duped by Satan and his minions in academia, Hollywood, Silicon Valley, and Washington, D.C. Most of America’s K-12 school districts and universities are indoctrination centers owned and operated by “progressives” who consider their mission to brainwash, not educate America’s young people. The mission of the leftist propagandists is to inculcate their victims with Satanic visions of utopia.

When members of Antifa and Black Lives Matter (BLM) burn Bibles, they are sending a message to their overlords that they reject God and long for a Godless America. It is important to note that, although powerful Democrats in D.C., Silicon Valley, Hollywood, and mainstream media outlets do not burn Bibles in public, they share a hatred of God with Antifa and BLM and wish to expel God from America.

The Democrat Party has a problem with God and they are working on solving it. While Antifa and BLM are burning Bibles, Democrat politicians are removing all references to God in Congress. For instance, the oath that witnesses take before testifying in front of Congress has been revised. The oath used to include the words “so help me God.” Now, witnesses will swear to “tell the truth, the whole truth, and nothing but the truth.” Another example of the Democrat Party’s rejection of God is the removal of any mention of God in the Democratic National Committee’s party platform. The Democrat Party showed members of Antifa and BLM that God is persona non grata; Antifa and BLM took matters a step further by showing the world that God’s word deserves to be stained with menstrual blood and burned.