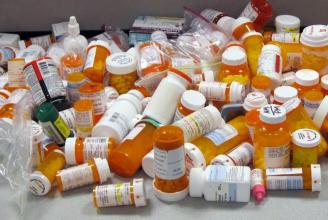 Every day, 115 Americans die from opioid overdoses. Last year, opioids, legal and illegal, claimed the lives of over 70,000 Americans, most of the deaths happened in West Virginia. America is in the midst of a deadly epidemic that demands action, and three members of the Jefferson County Commission in West Virginia took action by voting to remove a Civil war plaque from the county courthouse; take that, opioids!

It is refreshing to know that three people in West Virginia are doing something to fight back against an inanimate object that has claimed the lives of tens of thousands of West Virginians.

Jefferson County resident #1: “No, plaque sick. Have you seen the Civil War plaque in front of the courthouse?”

Jefferson County resident #2: “No, is that why you pop Oxycontin constantly?”

Jefferson County resident #1: “Yes, I have to numb the pain caused by the sins of people who lived 160 years ago. Why did they have to fight the Union? I hate my great, great grandfather, great-grandfather, grandfather, father, and myself. I’m plaque sick.”

Jefferson County resident #2: “Great news! The Jefferson County Commission voted 3-2 to remove the Civil War plaque at the courthouse. You’re finally free from the past! You can stop using Oxycontin, get a job, and put your life together.”

Jefferson County resident #1: “Utopia is on the way!”

Removing a statue, monument, or plaque that offends someone is a hollow, meaningless gesture that further serves to fracture America. The three people on the Jefferson County Commission who voted to remove a Civil War plaque are responsible for making an already unhealthy society even more unhealthy.

During the public hearings held to debate the possibility of removing the Civil War plaque, several local residents whose ancestors served as Confederate soldiers argued that the plaque should stay in place to honor the soldiers who fought in the Civil War. The pleadings of the local residents who favored keeping the plaque in place fell on deaf ears and the majority of county commissioners, including Patricia Noland, voted to remove the plaque. “I feel like it was the right thing to do. We didn’t want anyone to feel bad when they walk into the courthouse,” Noland said. She didn’t want anyone to feel bad other than the descendants of the monsters who fought for the Confederacy.

Noland, Jane Tabb, and Ralph Lorenzetti are probably not ideologues, but they are ignorant of the ramifications of their actions. The message they sent to the people who favored keeping the plaque in place is that their ancestors were so reprehensible that they have to be erased from history.

Healthy societies maintain a compact between the past, present, and future; you need all three present to support what Tom Wolfe referred to as “the great stream of societal continuity.” Unfortunately, three members of the Jefferson County Commission stepped out of the stream and sent a message to those who want to preserve the societal compact that they must join the present tense society they are creating for the Miley Cyrus generation.

The message for West Virginians who suffer from opioid addiction is that they don’t matter. What matters is the sins of their ancestors as defined by the progressives who are crafting a society that is not a tolerant, all-inclusive society. In the Left’s present tense society an opioid epidemic is inconsequential, and Civil War plaques are forbidden.