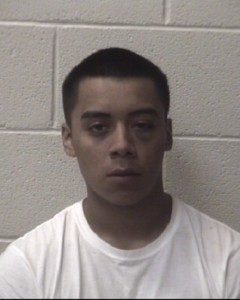 Another ‘DREAMer’ Charged with the Murder of an American

Countless Americans are victimized by your run-of-the-mill illegal aliens and illegal aliens who enjoy the special status of ‘DREAMer,’ the peaceful, docile children who dream of making America a better place. Antonio Castillo (22) is an illegal alien who enjoys official immunity from U.S. immigration laws, and he used his stature to allegedly murder Blade Mckinley Campbell (23) of Taylorsville, North Carolina.

According to the Alexander County Sheriff’s Office, on the morning of Sunday, March 24th, 2019, Castillo and Campbell were engaged in a dispute at a residence on Middle Road in the Stony Point community, when Castillo pulled out a pistol and shot Campbell. Campbell was pronounced dead at the scene. Castillo fled before the police arrived because he had other dreams to fulfill.

A few hours after the homicide, police located Castillo’s vehicle abandoned on the side of a road. The next day, officers tracked Castillo to a home in Taylorsville and approached the residence. When the officers on the scene closed in on the home, Castillo exited and ran through a nearby field before officers apprehended him and placed him under arrest. Castillo was captured with two bags containing an AR-15 and several rounds of ammunition; his AR-15 is not the murder weapon, nor did he legally purchase the weapon. Sorry, progressives, but illegal aliens of all ratings do not buy their firearms at gun shows or gun stores. Police are still trying to locate the murder weapon.

Campbell is dead because politicians refuse to secure America’s borders and enforce immigration laws. In fact, politicians and bureaucrats do the exact opposite of what is considered national security and law and order, they leave America’s borders open to all comers and provide immunity to any person who can get to or across our borders.

Authorities charged Castillo with the murder of Campbell, but he had accomplices. Politicians and bureaucrats provided Castillo immunity thereby giving him the opportunity to do anything he wished; he chose to murder an American.