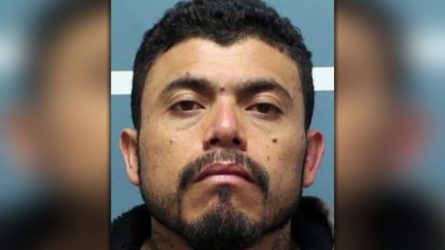 Did you hear about the terror that illegal alien, Gustavo Garcia (36), unleashed on several cities in California; no, that’s weird. You didn’t hear about Garcia’s “reign of terror” on NBC, CBS, ABC, CNN, CNBC, MSNBC?

Garcia was the typical illegal alien always sacrificing for the good of America and the American people. Sure, Garcia may have lived his life “undocumented,” but he made his presence felt in a big way. Before December 16, 2018, Garcia was a high school valedictorian, entrepreneur, neurosurgeon, military hero, astrophysicist, your stereotypical illegal alien. A couple of weeks ago, the American people found out that Garcia is not content with his impressive life.

Your government cannot tell you when Garcia illegally entered the United States or how long he has been here, but his criminal record started in 2002 and included illegal possession of firearms, armed robbery, and meth. Let’s see, in 2002, Garcia would have been 18 years old, which means he is a retroactive ‘DREAMer’ who dreams of firearms and meth. In 2014, Garcia’s dreams were derailed when he was deported, but America’s porous southern border allowed him to return to fulfill more of his dreams; no wall, no problem.

The following is a brief summary of Garcia’s rampage:

How can anyone suggest building a wall on America’s southern border? If America’s borders were secure Garcia would have been unable to enrich our lives. Diversity is our strength!

After Garcia fired several dreams in the direction of his ex-girlfriend’s home, a police officer who recognized his vehicle attempted to pull him over, but Garcia escaped when he left his vehicle and fled into an orchard. Don’t worry, America, to your good fortune, the docile, peaceful Garcia happened upon three farmers and held them at gunpoint, stole their truck, and sped away to continue making America a better place.

Eventually, police caught up with Garcia, and he took them on a high-speed chase at speeds well over 100 mph during which Pelosi’s special snowflake “attempted to strike vehicles” while shooting at the officers in pursuit. The chase ended when Garcia was ejected from his vehicle when it collided with another vehicle; he was pronounced dead at the scene.

No word yet on which Democrat, presidential candidate Garcia planned on voting for in 2020, we will have to wait for his mail-in ballot. We do know Garcia, and his fellow illegal aliens will never vote for a wall on America’s southern border.