Texans are not Turning Blue 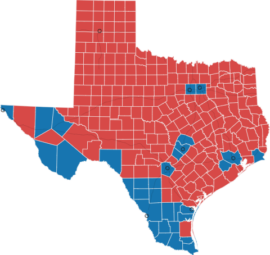 There was a time in America where all politics were local; only presidential elections were considered national elections, but times have changed. Today, all votes are national, and media outlets across America cover mayoral, gubernatorial, and congressional races as if the outcomes are a matter of life or death, but their coverage lacks complete, accurate, sober analysis. Texans are well aware that all elections are national and domestic economic migrants are capable of transforming a state.

The campaign for U.S. Senate between incumbent Senator Ted Cruz and Robert Francis O-Rourke, aka Beto (fake Mexican), received an inordinate amount of attention from national, media organizations leading up to election day and even more attention after the race was decided because of Cruz’s narrow margin of victory. Unfortunately, every news outlet and every political pundit failed to accurately explain why Cruz won by only 2.6 percentage points or approximately 223,000 votes.

Talking heads on the Left and Right tell their audiences that Cruz’s narrow victory is evidence that Texans are turning Democrat, but nothing could be further from the truth. It is intellectually lazy to conclude that O’Rourke’s solid showing against Cruz is evidence that Texans are morphing into progressives. Any analysis of the election results must include an in-depth investigation of Texas’s ongoing population explosion.

According to the U.S. Census Bureau, every year this decade Texas’ population grew by the most significant number of any state in the country. In fact, more than 1,000 people move to Texas every day. Since April 1, 2010, 3 million people have moved to Texas, the overwhelming majority of these people are economic migrants from California and other blue states such as New York, Illinois, and New Jersey. In 2015, 490,036 domestic migrants made their way to Texas. From July 2016 to July 2017, another 399,734 blue state migrants drove into Texas to take up permanent residence. Do you suppose there were a lot of Democrats in the hundreds of thousands of Californians who packed up their belongings along with their defunct political ideology and headed to Texas?

During the last decade, high taxes, tyrannical regulations, crime, and rising housing costs have sent California residents in search of economic opportunity. Domestic economic migrants are pursuing their financial dreams in red states like Texas that are booming due to low taxes and pro-growth policies. Unfortunately, Texas has become a haven for Democrats who are fleeing the wastelands they created because they voted for progressive politicians.

It is undeniable that O’Rourke came very close to defeating Cruz, but not because Texans couldn’t resist his bumper sticker slogans and promises of utopia. The blue state, economic migrants who flooded Dallas, Houston, Austin, San Antonio, and Frisco in the past ten years didn’t just load up their furniture, they packed their allegiance to the Democrat Party, and they voted for O’Rourke.