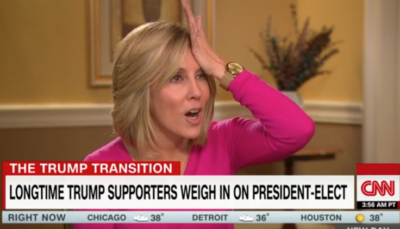 CNN’s Alysin Camerota hates President Trump and her allegiance to a Godless political ideology that makes it impossible for her to feel empathy for other human beings. Donald J. Trump’s improbable defeat of Hillary Clinton revealed the psychosis of people like Camerota, and it is ugly.

Camerota is an angry, hateful ideologue who suffers from Empathy Deficit Disorder (EDD). Camerota’s  EDD was on full display when she interviewed Rabbi Jeffrey Myers of the Tree of Life Synagogue after a deranged, hate-filled individual murdered eleven (11) members of his synagogue.

First, here is a description of EDD from an article that appeared in Psychology Today.

When you suffer from it you’re unable to step outside yourself and tune in to what other people experience, especially those who feel, think and believe differently from yourself. That makes it a source of personal conflicts, of communication breakdown in intimate relationships, and of adversarial attitudes – including hatred – towards groups of people who differ in their beliefs, traditions or ways of life from your own.

Now, imagine the pain and suffering inflicted on congregants of the Tree of Life Synagogue. “It’s a very horrific crime scene,” Alleghany Public Safety Director Wendell Hissrich told reporters on the day of the massacre “It’s one of the worst that I’ve seen,” Hissrich said.  The massacre of innocent people should elicit an outpouring of empathy from decent, caring human beings. However, people like Camerota see the carnage at Tree of Life as an opportunity to ratchet up their hate for President Trump and possibly score political points for Democrats heading into this year’s midterms.

.@CNN asks Tree of Life Rabbi Jeffrey Myers if @realDonaldTrump is welcome at his synagogue after Saturday's shooting.

During Camerota’s interview of Rabbi Myers, she provided him with an opening to blame President Trump for the deaths of his congregants, but he wasn’t interested in joining her in a hate session.

Camerota: “Do you blame anyone beyond the gunman for the attack?” Please blame Trump, please, pretty please. I hate Trump, and you can hate him too.

Myers refused to politicize the massacre.

Camerota was undeterred by Myers’s response.

Camerota: “What lights the match of hate?” Say Trump did it say it!  I hate Trump!

Myers: “I think you’re raising one of those great questions that people far smarter than I can answer.”

She pressed on with her loaded questions.

Camerota: “The President has talked about coming to Pittsburgh and coming to your synagogue. in the aftermath of this, do you want him to come.” Let the hate flow, Rabbi, reject the President.

Myers: “The President of the United States is always welcome. I’m a citizen, he is my President. He is certainly welcome.”

Camerota subscribes to a political ideology, progressivism, which is the new word for communism, socialism, and fascism, that is fueled by anger, hate, and malignant narcissism. She is unable to step outside herself because her life revolves around her ideology, so she feels nothing for Myers or his community. Camerota is inflicted with malignant EDD.