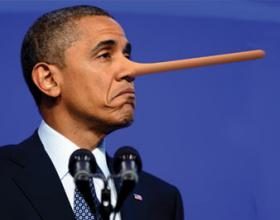 America’s former demagogue in chief, Barack Hussein Obama, continues his U.S. Civil Discord Tour with a recent stop in Cleveland and proved once again that if Democrats accuse an individual or group of some heinous act, they are the guilty ones, not those they charge (see the Republican Party’s “war on women”).

The video below is evidence of the deceit of Democrats like Obama who claims President Trump and Republicans are responsible for the tribalism that plagues America. The following nonsense starts at 14:40:

People are stressed and angry, and it seems as if all the chatter and anger on television doesn’t match up to their lies. And it brings us to the crux. It makes people feel the game is rigged and nobody is looking out for them. And historically that’s ripe for opportunity to exploit America’s history and divisions, racial, ethnic, and religious. Politicians try to keep us angry; they appeal to our tribal instincts.

Obama is the worst offender when it comes to fomenting civil discord by creating tribes. Let us put aside the community organizer’s time in our White House and ignore statements such as “If I had a son, he would look like Trayvon” or “Racism is in America’s DNA,” that are invitations to racial conflict, and instead take a look at the Democrat Party.

When you have some free time, you should visit democrats.org. Once you arrive at the home page of democrats.org, scroll down to the bottom of the page and feast your eyes on the primary tool Democrats use to divide and conquer America, identity politics. The following is an abbreviated list of the tribes Democrats have created and turned into victim groups while declaring they are their saviors:

Obama and his fellow Democrats use a political strategy of divide and conquer that reduces people to nothing more than members of tribes based on immutable characteristics such as skin pigmentation. In the America Obama and his comrades are creating, the sum total of a human being is his or her identity, not his or her characteristics, qualities, thought patterns, et cetera; a person’s identity determines how he or she is supposed to think, act, and vote.

Contrary to what Obama claims, Democrats are responsible for tribalism in America, and it is the tribes they created that they depend on to win elections. The message from Democrats is clear; Take a look in a mirror, then visit democrats.org to find your tribe, and vote accordingly.