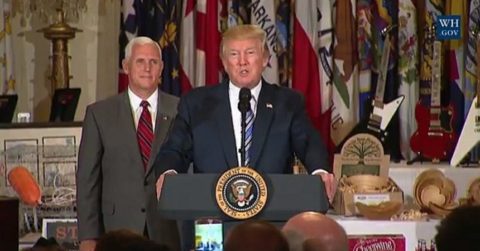 Mainstream Media Prefers a Recession Over Made in America

This week, President Donald J. Trump hosted his second Made in America product showcase at the White House. President Trump invited companies from all 50 states to participate in the celebration held on the South Lawn. It was a magnificent event that the mainstream media ignored. Russia, Russia, Russia! Trump is a Nazi! Trump is a traitor!

At the Made In America showcase, there were boots from Texas, snowboards from Colorado, copper pipes from Georgia, stoves from Idaho, boats from Arkansas, et al. However, to the dismay of the mainstream media, foreign goods were excluded. There were no Chinese nationals in attendance to showcase the cheap, straight to landfill products China is allowed to dump in the U.S. market; if you expected to see a new, Chinese-made $15 toaster soon to appear in a Target or Walmart near you, you were disappointed.

For decades, the United States allowed other countries to take our jobs, close our factories, and plunder our wealth. What was happening was horrible! Our leaders in Washington did nothing; they let out factories leave, they let our people lose their jobs, and gave jobs to workers in far away lands; that’s not free trade, that’s fool’s trade. It’s stupid trade, and we don’t do that kind of trade anymore.

Obviously, this is quite a departure from the previous four U.S. presidents who didn’t care about American workers. Unlike President Trump’s predecessors, he doesn’t think globalism is an inevitable, unstoppable force and he’s right.

President Trump went on to tout several economic successes since he took office eighteen months ago. He referenced the 350,000 manufacturing jobs created since the start of his term. He also talked about the historically high confidence level of manufacturers, an impressive 95.1 percent. Let’s be clear, the government doesn’t create jobs but has the power to create an environment conducive to job creation. Trump’s tax cuts and slashing of tens of thousands of regulations set the stage for a revival of manufacturing in America; this is something that bothers Democrats, RINOs, and the Pravda media.

How do Democrats/Progressives/Communists/Socialists respond to America’s strong economy and President Trump’s America Frist policies? The Left is rooting against America and the American people; Democrats are desperate for a recession.

If globalism is an unstoppable force predetermined by history and tariffs are ineffective, why do those on the Left wish for a recession?

For the twenty-eight years before Donald J. Trump took office, the corporate slaves who inhabited the White House and Congress told us globalism is written in the stars. We were told there was nothing they could do to stop factories from closing and millions of jobs moving to foreign lands. However, it wasn’t an unrestrainable force of nature that closed factories and shipped jobs overseas, it was the North American Free Trade  Agreement (NAFTA), the General Agreement on Tariffs and Trade (GATT), and a promise from national politicians to their corporate donors that they would never face the imposition of tariffs on their foreign-made products that led to the collapse of America’s manufacturing base.

President Trump understands that intentionally lousy trade deals for the U.S. led to unemployment and misery for millions of Americans. When America loses factories, it harms those who lost their jobs and America as a whole. In the words of President Trump, “Every time a new factory opens, every time jobs are returned to our shores, every time we buy a product made by our American neighbors, we are renewing the bonds of love and loyalty that link us all together.”  President Trump’s patriotism and love for Americans is a welcome departure from the corporate chattel who occupied the White House for decades.