Four ‘DREAMers’ Use America to Fulfill Their Methamphetadreams 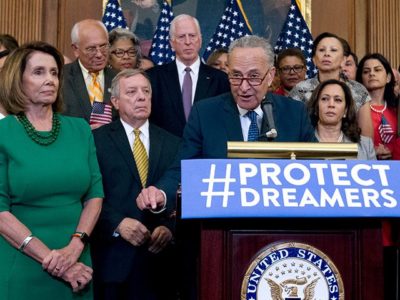 Four ‘DREAMers’ in Greenville, North Carolina are behind bars after being busted in possession of eleven pounds of methamphetadreams. Arturto Bahena (27), Christian Toledo (22), Ana Bahena (25), and Elizabeth Mondragon (19) are the DREAMers who ran afoul of the laws of North Carolina and face lengthy prison sentences if found guilty. Ana Bahena and Mondragon are being held under $500,000 bonds, and Arturto Behana and Toledo are being held under $1,000,000 bonds. Arturto Bahena and Toledo’s bonds are higher because they were in possession of handguns at the time of their arrests. Due to the number of methamphetadreams the accused were in possession of and the fact that they reside in Georgia, the police suspect the innocent, docile DACA kids of trafficking dreams.

The four defendants enjoy immunity from federal immigration laws, but they do not hold any type of special status with the Greenville Police Department, so they have to face the consequences of their actions. It is unlikely that any of the DREAMers will post bail before their arraignments or after, so the Pitt County Detention Center will use the tax dollars of hard-working North Carolinians to support them. However, the accused would not be in a detention facility if national politicians had not ignored U.S. immigration laws for decades.

When the government shirks its constitutional responsibility to secure America’s borders and enforce immigration laws, they don’t suffer, the American people suffer. It is sobering to think how many people would have been harmed by the meth that most assuredly would have found its way into the communities of Greenville if local police had not apprehended the DACA kids. The meth would not have touched the lives of Nancy Pelosi, Paul Ryan, Chuck Schumer, or Mitch McConnell because they are shielded from the ramifications of their policies and inaction, but Americans in North Carolina would have suffered the consequences of more drugs and illegal aliens flowing into their communities from Mexico.

Americans are political casualties of Democrats and Republicans; two wings on the same bird of prey. Democrats are not interested in securing America’s borders and deporting illegal aliens because they’ve decided Hispanics are the key to them obtaining uninterrupted, unchecked power. The GOP establishment doesn’t spend time thinking about our southern border or illegal aliens because of their corporate donors’ unquenchable thirst for cheap labor. Arturto Bahena, Ana Bahena, Christian Toledo, and Elizabeth Mondragon live in America and enjoy amnesty from U.S. immigration laws because of Democrats’ thirst for power and the master-slave relationship between corporations and establishment Republicans.