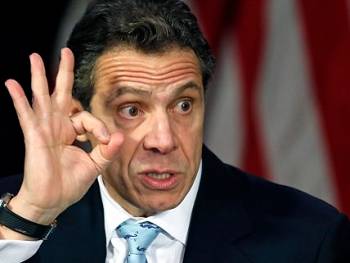 New York Governor Andrew Cuomo (D) thinks Eric Schneiderman (D) is not a morally bankrupt person who is responsible for his actions, but rather he is a product of America. In a statement to New York media outlets, Cuomo tells us that America is to blame for Schneiderman’s boorish, abusive conduct because America’s ill-treatment of women is a chronic disease that afflicts men collectively.

“This nation has a chronic, disturbing, disgusting behavior of sexual harassment against women and it has gone on for a long, long time, and it must stop.”

No, Cuomo, America does not have a problem of sexual harassment towards women.

There are tens of millions of American males who have never raped, sexually assaulted, physically accosted, or verbally abused a woman; there is no collective mistreatment of women. However, Democrats want you to think that every man is a sexual deviant incapable of self-restraint, so you will forget about the fact that the #MeToo movement is a response to the disturbing behavior of male feminists in Hollywood. The leftists that own and operate Hollywood are guilty of mistreating women, not America. Cuomo’s attempt to deflect and blame “this nation” is a pathetic, embarrassing attempt to excuse his friend and fellow Democrats’ behavior. Cuomo projects the sins of Schneiderman onto America to absolve him. 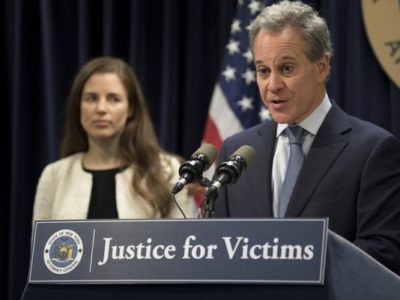 Eric Schneiderman, Hero of the Left

The reporters who cover Cuomo did not ask him his opinion on any of the details of Schneiderman’s interactions with the four women he allegedly abused, so we don’t know what he thinks of his friend’s apparent longing for master-slave relationships with brown women. Democrats are still upset that they lost their slaves; damn you, Abraham Lincoln! Cuomo would probably blame America’s racist past for Schneiderman’s insistence that his Sri Lankan girlfriend, Tanya Selvaratnam, call him “Master.”

According to Selvaratnam, Schneiderman forced her to call him “Master” and he referred to her as his ‘brown slave.’ “Sometimes, he’d tell me to call him Master, and he’d slap me until I did,” Selvaratnam said. “He started calling me his ‘brown slave’ and demanding that I repeat that I was his property;'” take that, Abe Lincoln! It turns out Democrats want unlimited legal and illegal immigration from third-world countries for more than votes and cheap labor for their rich donors.

Cuomo is desperate to get the spotlight off Schneiderman and his political party. Schneiderman was a hero of the #MeToo movement, and the Democrat Party saw him as a rising star with a bright future, now, he’s just another Democrat who abuses women and quite possibly wants some slaves as his Democrat forefathers possessed. Now, all Schneiderman has is fond memories of sexual encounters infused with slavery.