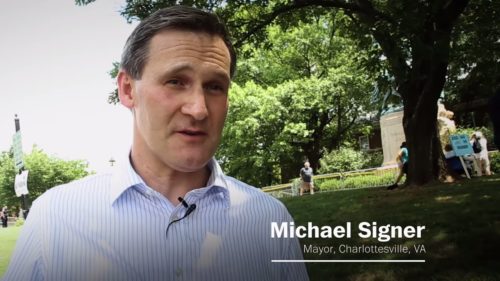 The violence in Charlottesville, Virginia between several hate groups, including Black Lives Matter, AntiFa, and the Ku Klux Klan, could have been prevented if local and state police were allowed to do what they are paid to do; keep the peace. Unfortunately, someone ordered police officers to stand down and let the various hate groups spend the day punching and beating each other with blunt objects. Who told the local and state police to stand down, and who stood to gain from the violence and chaos that erupted?

The bizarre indifference of police in Charlottesville to the mayhem that engulfed the city has left a lot of Americans wondering why at a time when the police were faced with a situation that demanded action, the police walked away. It would be absurd to conclude that local and state police witnessing the scene in Charlottesville decided on their own to ignore the burning fuse on the powder keg and retreat to their safe zones, right? Who gave the order to stand down; Mayor Michael Signer, Governor Terry McAuliffe?

Signer and McAuliffe are Democrats who despise President Donald J. Trump and want the attacks on him by the mainstream media and deep state to continue until the tsunami of negative press and leaks by rogue bureaucrats is too much for his supporters to withstand and they along with the Republicans in Congress who support him decide to abandon him. The Russian narrative and the denigrating of Trump supporters is part of a religious crusade by the Left to demonize Trump to erase the result of the 2016 presidential election ultimately. 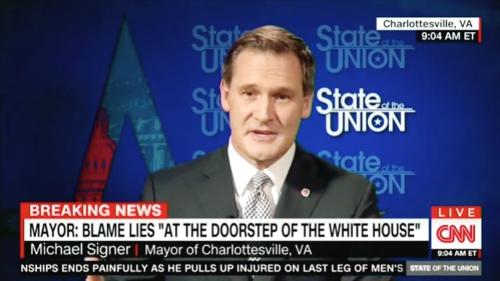 Mayor Signer is basking in the glow of the national spotlight he has suddenly been given, and he’s used it to launch the usual attacks on Trump. During Signer’s appearance on CNN’s “State of the Union,” he sounded like a stereotypical Democrat firmly committed to excoriating President Trump and pushing the Democrat Party’s divide and conquer strategy that has as its foundation identity politics. When asked who is responsible for the chaos in Charlottesville, Signer said, President Trump had “emboldened the racists who caused the violence” in his city. Signer used his opportunity on a national cable network to use the “look at the campaign he ran” narrative to condemn Trump’s presidential campaign and sully his victory. Why is Signer on CNN criticizing the President of the United States after his epic failure to protect the residents of Charlottesville?

The pandemonium that enveloped Charlottesville could have been prevented if the police were allowed to do their job. Who reduced the cops to spectators? The person(s) who ordered the police to stand down is no better than the thugs from AntiFa, Black Lives Matter, and the unstable individual(s) from whatever Nazi, Aryan Nation groups who showed up in Charlottesville looking for a fight.