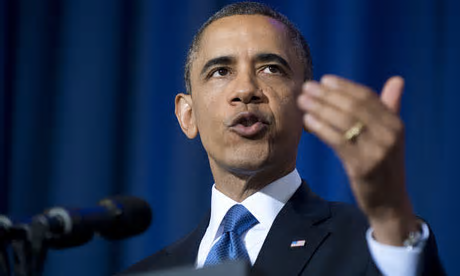 The Community Organizer of the United States

Barack Hussein Obama has never been presidential nor has he provided leadership for the United States of America, since he took up residence in the White House six years ago. After the Democrats were soundly trounced in last month’s mid-term elections, it has become painfully apparent that all Obama is interested in is issuing unlawful Executive Orders while serving as the most powerful community organizer the world has ever known.

Obama clearly understands that he no longer has to worry about elections. He is also well aware that no matter what he does, he is not going to be removed from office. These realities give him free reign to issue edicts designed to fundamentally transform America.

Obama is using his freedom from elections and consequences to promote racial division and civil discord. For instance, Obama provided Black Entertainment Television (BET) with an interview during which he stated, “Racism is deeply rooted in our history and society.” This is the type of statement made by race peddling community organizers who want to take advantage of a situation, not the President of the United States. The President of the United States is supposed to represent every American citizen not just those who share his skin pigmentation, political ideology, or racial agenda.

Obama also provided an interview to Univision Communications (Spanish language television) to discuss his Executive Order that provides amnesty to illegal immigrants, but it was his discussion about “white privilege” that captured my attention. I had never heard of “white privilege” until Obama discussed it with a Mexican national, Jorge Ramos, on Univision. It appears as if Ramos wants Obama to do more to address “white privilege.” Evidently, “white privilege” is a term used to describe how white people enjoy all the advantages of society just because they are white.

Obama seems to have heard the term “white privilege” and agrees with Ramos that “white privilege” is a serious problem in America. I had no idea that “white privilege” is even on the list of social problems that plague America. Obama explains to Ramos that because of his policies there is “more equality, access to health care, access to college, access to opportunity,” and because of the work Eric Holder has done under his direction “the criminal justice system has improved.” I guess all white people have health care coverage, plenty of money for college and automatic acceptance to any college based on the fact their white, the opportunity to do anything they want, and carte blanche to commit crimes with no consequences.

A community organizer understands that he has to manipulate people in order to get them to create chaos in local communities. The community organizer shields himself from any responsibility for the actions of the people he uses to disrupt entire cities by claiming he wants “peaceful protests,” but there is no such thing as a “peaceful protest.” BET, Univision, and the useful idiots who spend their days protesting instead of working provide cover for Obama.

In the video above Obama ask the “protesters” in Ferguson, Missouri to conduct “peaceful protests” going forward. (His request came long after several days of riots, arson, and murder.) I guess Obama, the community organizer, has a different idea of what peaceful means. There is no such thing as a peaceful protest. The protests that have taken place in America in response to a couple of grand jury decisions related to nationalized events have turned law and order upside down and disrupted the lives of millions of Americans.

There is no such thing as a peaceful protest because people’s lives are negatively affected when any type of protest takes place. Is a protest peaceful when people are unable to go to work because entire cities are shut down so the useful idiots can march down city streets? Is it peaceful to shut down freeways, train stations, and businesses? Is it peaceful to intimidate drivers and pedestrians? I guess Obama thinks a protest is peaceful, if nobody gets killed and buildings do not get burned down? Obama is very aware that threats and intimidation are not peaceful. He is also well aware that “peaceful protests” have the ability to lead to riots, assaults, burglaries, arson, and sometimes murder.

You need look no further than the murder of two New York City police officers after a “peaceful protest.” The video below provides footage of a “peaceful protest” in NYC in which the protesters continuously chant: “What do we want? Dead cops! When do we want it? Now!” It doesn’t sound very peaceful to me. I guess calling for the murder of cops is peaceful? These people want cops to die, correct?

The fact is that Obama is a community organizer who has the opportunity to implement his Marxist agenda in order to fundamentally transform America. His sole focus is his political agenda, but he has shown himself to be more than willing to attempt to incite riots and give a wink and a nod to protesters. Who could forget these words from the Community Organizer of the United States: “If I had a son, he’d look like Trayvon.”

The Unites States of America is starving for leadership. America doesn’t need a POTUS who hates America and segments of its population. America desperately needs a leader who can restore law and order, and restore dignity, honor, and professionalism to the Office of the President of the United States.